This month, I am publishing the first part of an essay my mother (born Catherine Thomson McKay in 1938) wrote about her namesake maternal grandmother – the great-grandmother who I remembered from my early childhood. With my mother’s permission, I have edited and updated her text slightly, without removing the spirit of the original. This potted biography was originally an assignment for a course in family history, a subject my mother took up after I returned home from London and recounted my exploits as an heir hunter in Holborn in the 1980s (see The Incidental Genealogist is Born). When my mother wrote the article, she was younger than I am now; which is a sobering reminder of how time has a habit of overtaking us all. But this can also be a spur to action, as it is never too late to start working on a family history and interview living relatives.

Through editing this post, I came to realise how much of my Edinburgh ancestor’s lives were based around The Canongate – the eastern end of the Royal Mile, and a place I knew well. In the 1990s, not only did I live and work in the heart of the district, but on summer evenings I would lean out of the flat window, surveying the busy thoroughfare below, musing on the fact that citizens hat done this for centuries (although I did not go as far as to throw out the contents of my chamber pot, as was once commonplace!). Ghost tours stopped in the centuries old courtyard behind the tenement, spooking the residents with their shrieks and howls. On quiet Sundays I’d explore all the hidden closes and gardens of this most historical street. I became enchanted with some of the nooks and crannies that the majority of visitors overlooked, including White Horse Close, where unbeknownst to me, my great-grandmother had lived as a girl in the 1880s. In fact, I even took my husband there on our first date – and we’ve been back many times since without ever being aware of the family connection.

In the months that follow, I look forward to sharing this remarkable district of Edinburgh with you. As my mother says below: All history passed that way. 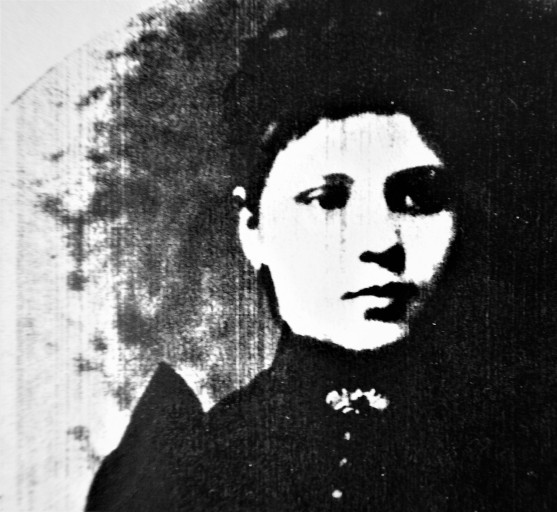 My maternal grandmother, whose name I share, was an ordinary and unremarkable working-class woman, typical of her social standing and the times in which she lived. But in retrospect, three facts about her life now appear remarkable to me today: she lived through the Boer and the 1st and 2nd World Wars; her lifetime coincided with the reign of six monarchs, spanning Victoria to the present Queen Elizabeth 2nd. And she produced eleven children with predictable regularity from the time of her marriage in 1898 until shortly before her 43rd birthday in 1917.

Catherine Miller Thomson was born in Glasgow on February 9th, 1874, the eldest child of Daniel Thomson, who was a soda water bottler, and Jane Thomson (neé Queen), a reeler in a cotton factory. Her parents were only teenagers at the time of their marriage in 1871, yet her father’s parents were already deceased by that time, so she never knew her paternal grandparents – only that her Grandfather Thomson had been a watchmaker and that she bore the name of her dead grandmother.

Her maternal grandparents, John Queen (a bootmaker) and Jane Queen (neé Gallacher) were of Irish parentage, and it may be assumed that, like many of their generation, they emigrated to Scotland to escape the famine and poverty of Ireland which afflicted working-class families at that time. Although my grandmother was brought up in the Protestant faith, it is said that she was taken by her Irish grandmother to be baptised in the Catholic Church shortly after her birth. At that time there were a great number of Irish living on the west coast of Scotland who had exchanged their life in Ireland for an only slightly less impoverished life in Scotland.

When grandmother was six years old, her family moved across Scotland from west to east, a distance of some fifty miles, to the capital – Edinburgh. Here Daniel Thomson continued his employment in a local lemonade factory. This was possibly one attached to one of Edinburgh’s many breweries, established over centuries due to the wealth of underground springs in the city. By this time Catherine had three little brothers for company: Edward, Daniel and Thomas. In the ensuing years, three more siblings followed: Margaret, Jane and Charles. The family initially lived in the old Canongate district of the city, which is to the south side of the Royal Mile, an area that was being increasingly industrialised due to its location close to the main railway terminus. At the time of the the 1881 census, they were living in the atmospheric White Horse Close off the Royal Mile (a much sought-after address today).

The Canongate district close to Holyrood Palace had seen many changes over the centuries. The Royal Mile (although not quite a mile) was the spine of the old town, running from the castle to the palace. In the 16th century, Mary, Queen of Scots had ridden up and down it’s cobbled street, passing the house of John Knox, the Protestant zealot who berated ‘this monstrous regiment of a woman’ (meaning an unnatural female ruler). Interestingly, White Horse Close – which once had a stabling inn on site – is believed to have been part of the Royal Mews in the 16th century. Mary, Queen of Scots’ white palfrey (a high value riding horse popular with nobility at the time) is said to have been stabled there, and so gave the courtyard its name Although the dwellings in the Royal Mile were crowded and congested, in those days it contained the homes of the gentry, who lived cheek-by-jowl with the ordinary folk.

All history passed that way. In 1736, the Royal Mile was the scene of the Porteous Riots, when the local citizens, enraged at the hanging of a smuggler who had won popular sympathy in Edinburgh by helping a friend escape from the hated Tolbooth Prison, began to protest and were subsequently shot at under the orders of the notorious John Porteous, captain of the City Guard. After Porteous was tried for murder, some of the citizens took the law into their own hands and broke into the prison to drag out Porteous and hang him for themselves, (a barbaric incident, graphically described in Sir Walter Scott’s novel The Heart of Midlothian).

Several years later, in 1745, Bonnie Prince Charlie, at the head of an army of 2,000 Highland clansmen, marched down the Royal Mile and remained for six weeks in the city before undertaking his ill-fated invasion of England and the final debacle of Culloden. The Jacobite officers’ headquarters at that time was said to be within White Horse Close, and I sometimes wonder of my grandmother ever knew about these historical connections to her family’s first home in the city. However, by the time the Thomsons arrived in Edinburgh, the New Town, with its imposing crescents and squares of Georgian and neo-classical buildings had long since been completed, taking the wealthier residents to the other side of town, while others moved out to mansions in the ever-expanding suburbs. Despite its name and location, the Royal Mile was thus left to house the poor, in particular the south side, where my grandmother and her family lived, and the White Horse close of the 1880s was very different from the twice renovated ‘fairy tale’ version that exists today.

From what I know, my grandmother’s childhood passed happily and uneventfully. As the oldest of the family she was responsible for looking after her younger brothers and sisters. Her maternal grandmother, the Irish Jane Queen, lived with the family at that point and Grandma was constantly being called in from playing with the other children in the street in order to thread the old lady’s needle for her hand sewing. Her grandmother had trained as a seamstress and liked to keep up her skills but had become very short-sighted. Thus to enable her free time not to be curtailed, Grandma would thread a very long length of sewing cotton through the needle. But despite the chance to play outdoors, in Victorian times childhood was short and she left school at twelve to become a warehouse worker in a local sweet factory.

By the age of 18, Catherine Thomson was a very attractive young woman, with dark eyes, full lips and soft dark hair fashionably coiled up and curled. She was short of stature with a neat waist and curvaceous bosom. Her carriage was very erect, and her legs were slim with very slender ankles. Even in old age her hair retained much of its colour, her ankles their neatness, and her back its straightness.

The year 1892, when Grandma turned 18, must have been an eventful one for the family as, at the age of 40, my great-grandmother Jane gave birth to her seventh and last child – a little boy named Charles Queen Thomson. My grandmother had a special place in her heart for her smallest brother; the gap in years between them meant that she could have been his mother. In that summer, too, she was invited to go on a picnic where she met the handsome, dark-eyed young man who was to become her husband and my grandfather. The twenty-year old Robert Neilson worked as a brass finisher and lived in the same district of the city. Physically the young courting couple were very similar – both dark-eyed and dark-haired and small in stature. But whereas Catherine’s features were full and rounded, Robert’s were sharper with an aquiline nose. In personality, too, they were very different. Robert had a twinkle in his eye, was laughing and affectionate by nature, whereas Catherine was rather shy and found it difficult to show her emotions. 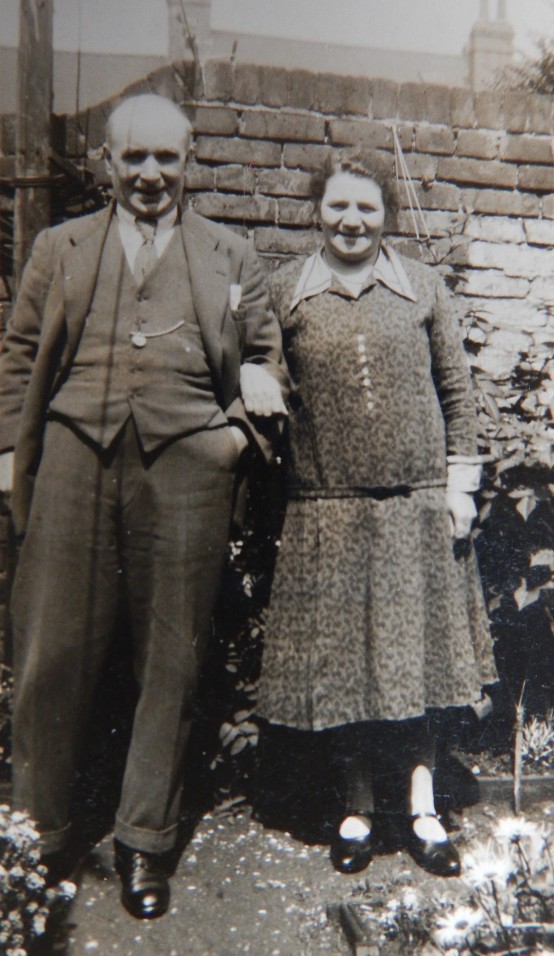 The couple were married in 1897 in Robert’s tenement home in the nearby Dumbiedykes, a custom which was common in Scotland at that time. Within a year, their first child was born: a boy named Adam, after his paternal grandfather. Ten more pregnancies followed at roughly two-yearly intervals over the next two decades, one of which ended in a stillbirth and another in the death of an infant daughter (Margaret) from childhood pneumonia. Decades later, the surviving nine children were to depart the world almost exactly in the same order as they arrived in it, with most of them – like their mother before them – miraculously reaching their nineties.

To be continued in Part 2 next month.

The Incidental Genealogist and her Mother, December 2021