It’s been particularly hot where I live in Switzerland this summer, and so early mornings and evenings are often the best times to be out and about. But as a self-confessed ‘owl’ (with another of my species as a house guest) it has sometimes been difficult to achieve much before sundown. Thus it was a treat to be able to enjoy a quirky British film at our local open air cinema last month, taking advantage of the cool evening breeze from the lake. Set in a gloomy, early 1960s Newcastle, The Duke was a rather incongruous choice for our location, yet despite that – or perhaps because of that – the mainly Swiss audience seemed to love the film, even if the subtitles did not convey all the nuances of the dialogue.

Jim Broadbent and Helen Mirren played a suitably dowdy middle-aged, working class couple from that time; and although the period details seemed to be spot on, I couldn’t help but feel that the street scenes seemed rather contrived. Were there really that many children playing that many different games outside the terraces of Newcastle in 1961? Sometimes it was difficult to know where one game ended and the other began. Later, when my mother and I compared notes, we agreed that it had almost felt like watching one of Michael Palin’s Ripping Yarns, a 1970s comedy TV series set earlier in the 20th century, where British customs of all classes were parodied.

My mother did, however, recall that it had been common for her to play with friends in the streets in the 1940s, despite my grandmother’s lamentations that many more children were to be seen outdoors in her day. And while my own childhood had also been as relatively unstructured and technology-free as that of the previous generation, one of the main differences in the intervening decades was the increasing number of cars on the road. Yet because I grew up on the outskirts of a village and my mother in a city suburb, then it was difficult to really compare our experiences. Nevertheless, both of us came to the conclusion that the philosophy of our childhoods was mainly the same: to be able to explore our environment freely in the company of other children. Of course it was that same spirit which brought my grandmother and her siblings out of their crowded Edinburgh tenement and onto the car-free streets of the Dumbiedykes and beyond to the grassy freedom of Holyrood Park, which abutted the neighbourhood. 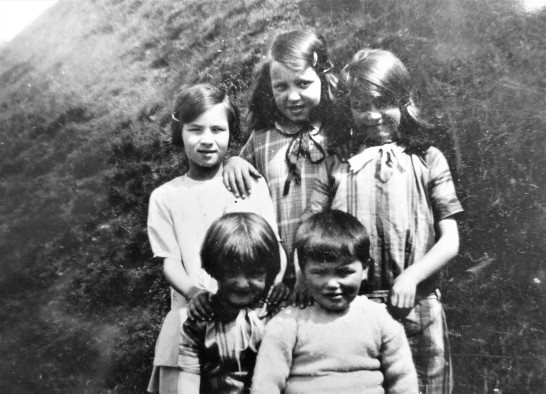 In the above image, my grandmother’s youngest sister Mary (b1917) was snapped playing with local childhood friends on the slopes of Arthur’s Seat, the extinct volcano which dominated the view from the balcony of the family’s tenement flat (see A Tenement with a View). Only a few years later, Mary would be taking the children of her older siblings across to the same park on sunny days.

In this photograph of my two great-aunts as teenagers dressed up for a day out in Holyrood Park with their fashionable thin wrist watches and lisle stockings, they are flanking their much-loved nephew, a child the whole family adored due to his sunny disposition. There is rarely a picture of Jimmy without a grin or laugh on his face. In contrast, his two young aunts never seemed to smile for the camera as children and were always captured with slightly wary expressions. When Mary and Anne posed with a neighbourhood child for a street photographer ten years earlier, they certainly did not look as if they were particularly enjoying the occasion.

Anne and Mary Neilson with a neighbour, Dumbiedykes c1920

I have always wondered who took that photograph of my great aunts. Was it the same person who also managed to assemble the large group of Dumbiedykes’ children out playing in the street (shown below)? The standard of the photographs would indicate it was a professional photographer who took pictures of local children whose parents would possibly then buy the copies. There were certainly other such photographs of groups of children in the city taken during the same timeframe, which I came across on a historical Edinburgh photography website. However, as one contributor who posted a similar street scene of Edinburgh children from the early 1920s pointed out here: I can’t imagine why this photo would have been taken. The frame is completely plain with no photographer identified. Who would bother? I doubt it would have been for payment that would have to be collected from numerous parents. Could it be a Sunday School photograph?

The more I look at the details in our own family photograph above, the more I think that the Sunday school theory could be the best one. The children seem too smartly dressed just to have been playing in the street. In the back row, my Great Uncle Bob is wearing one of the narrow woollen striped ties of the period and in the front row my Great Aunt Anne (5th from right) is wearing gloves and a fashionable coat. I also know that the Neilson children were regular attenders at their local Sunday school at St. John’s Street Church on Holyrood Road, but that they were also members of the Band of Hope, a temperance organisation for children, based on Christian principles. However, given the small size of the group, I believe it more likely to be a Sunday school class, taken outdoors due to the technical limitations of the equipment at the time. Yet the domestic background and lack of adults remains a problem. Perhaps it really was just a street photograph and the parents had been forewarned, making sure the children were turned out neat and clean for the occasion. But whatever the reason for its creation, it’s certainly one of my favourite photographs in my Scottish family album.

2 thoughts on “The Children in the Street”